How to Decide What Material Belongs on Your Showreel

You are either in the position where you have hardly any showreel material at all, or you have an abundance of projects and you’re at a complete loss as to which pieces to use in the final cut. In this blog I will help you make some decisions.

The obvious answer to ‘What material should be on your reel?’, is: the best material.

But in truth, things are more nuanced than that– and ‘best’ can be defined in many different ways.

Here’s another question: which scenes show you at your most employable?

Maybe you played a zombie in a big-budget feature film, but should it be on your Showreel? And if you decide yes, should it be displayed prominently at the beginning? I guess you need to decide if zombies are your selling point and if so, go for it.

Another question: in which clips are you the most believable?

Do you have a scene where you look and sound like a normal human being? That might sound like a harsh question but the reality is, your acting gets more natural each time you work at your craft and if you’re clinging to a scene from drama school six years ago because you shared a scene with someone from ‘Downton Abbey’, it might not be doing you any favours.

Natural and believable trumps employable, but in many ways they’re the same thing. A casting director is relieved when the first thing they see is a human being being believably human, it’s rarer than you think.

Do you have any subtle scenes that don’t provide all the answers?

The person viewing your reel is intelligent and will respond to scenes that leave a few question marks. You have probably felt that instinct when watching back that bad student film you did, or when shooting a film with your friend who’d just written their first screenplay: often these scenes have everything but subtlety, and instead you’re left with two cardboard characters shouting at each other in a kitchen.

Do you have bad scenes where people are shouting at each other in a kitchen?

Then you should probably cut that scene, even though you think it’ll get you cast in a soap.

Here’s the difference between your scene and the soap scene: in a soap, we know and care about the characters and they’ve been beamed into our homes our entire lifetimes. Those scenes have context and weight.

If you shot a scene at drama school where you’re shouting “you cheated on me, I know it”, chances are it’s over-acted (not blaming you, it’s as much the direction).

(A brief note: I have and do direct many scenes in kitchens that happen to be arguments, it can work, I just mean that one you hang onto from drama school eight years ago because it’s the only scene where you’re not a zombie, is probably not doing you any favours).

Do you have a piece that anchors the entire reel?

A friend of mine had a theory about the showreels I’ve made (from scratch), she said the best actors always have one stand out scene, and the average ones don’t.

One GREAT scene, on any reel, will lift it hugely.

The actors I know who get quality work, have that scene. The ones who don’t get work, often have a lot of reasonably good scenes but nothing that stands out. 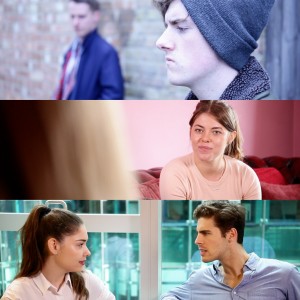 How does a scene stand out?

But it is largely to do with hitting the nail on the head, casting-wise. Let’s say I was to write a scene for everyone who reads this, and the scene would be casting you as a murderer.

If you’re working from scratch, you can build material around your strengths. If you’re editing from completed work, you need to still find the story, still find the ‘you’ within the material.

Is it professionally edited?

Here’s where a lot of actors go wrong. They do it themselves because they have iMovie. Bad idea. Sure, you can lump scenes together, much like an editor could stand in front of a camera and say words, but a quality edit from a seasoned professional makes a world of difference.

And don’t worry, I’m not pitching for work as I am not currently taking on new editing clients (I only keep a small handful of editing clients – whereas I have wider availability with my showreels from scratch service).

How much focus should you give to the clip where you’re acting with someone famous?

It’s a common question. First of all, it’s a great question to have! And the fact you have this clip is confirmation of the great path you’re on.

The real question to ask yourself is: what story does the clip with the famous person tell?

Here’s the story you want it to tell: “I am a professional, and you should hire me.”

Any other story you’re trying to tell is going to backfire.

You don’t want to tell the story:

“I am relying heavily on this clip.”
“I am on equal footing with Tom Hardy in this scene.”
“This is all I have.”

If you had one scene with him in the movie, and you were playing a shopkeeper, or his long lost Uncle, then what your reel should show is: you played a shopkeeper or his Uncle in a scene.”

If you try to make the clip look like more than it is, or you keep adding in random reaction shots of you, then you’re beginning to tell a different story which isn’t true, and the viewer will notice the inconsistency.

My main point is: That you were in that scene and did that job is enough, and you will get hired to do similar and better work again.

Can you show you’re a quality actor without relying on music and montages?

We all know by now that montages are out. But perhaps you’ve never heard the reasons why.

It’s because they show a lack of trust in the material you have. They are an attempt to either a) paint over crap, or b) To make it seem like you’ve done more than you have.

Can you show us, in a simple way, that you act really well?

The best scenes, more often than not, are of a character taking in some news. When I create scenes for actors, this simplicity is golden. It’s not the character saying ‘I love you’ who’s interesting. It’s the one receiving the news. Does he love her back? Will he say it back? What is he thinking about?

Those reactions, in their deceptively simple way, show your acting ability. Utilise those moments! 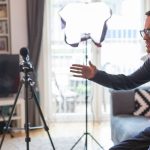