The Best Acting Showreels From Scratch Service In London

The last couple of years have seen a dramatic increase in the number of companies offering showreel from scratch services for actors. It’s understandable why — it is very hard to make a living as a filmmaker, and there are thousands of actors out there who are desperate for good footage.

But many of the services fall short. It turns out that making a showreel is not an easy task. You need to be able to:

– Capture what is truly unique about each actor.

– Consistently create new material that is relevant to your clients.

– Create high quality visuals despite constraints of budget and locations.

In the last few years I have had a dramatic increase in the amount of actors coming to me for showreels. This is a great privilege to have, and many of those actors have gone on to become good friends who I have cast in my own films and also in my web-series ‘Sally The Life Coach‘ (starring Natalie Gumede, out in January). But it’s also tough — if you are filming two or three showreels a week, every week, how do you keep the quality high?

Especially when it comes to material. Writing is tough. How can I be at the top of my game every time? 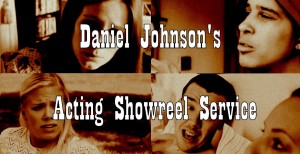 Some people see a showreel as ‘just a showreel’, but for me, there is a real art form to it. I am judged on my reels as much as I am judged on the films I make. And that’s how it should be.

A recent client told me that her reel was being paid for by her parents as a joint birthday/Christmas present; which was a huge reminder: these showreels contain people’s dreams. Actors trust in me to create a showreel which will capture their unique talents, which will then propel them into bigger roles, better agents, more opportunities.

That’s not something I take lightly. And I realise I am in a unique position where I get to collaborate with some of the finest upcoming talents, creating the opportunities they’ve not yet been able to make happen due to what is a painfully tough marketplace.

I used to want to be the ‘best acting showreels from scratch service in London’, but I realise, nobody can be crowned with that title. It depends what you are looking for as an actor. Some of my competitors are really impressive — the production values they bring to the table really add a sense of glamour to their reels.

With my showreels – the priority is acting performances. How can I, as a writer, create what you need to showcase your craft? And how can I direct you in a way that will make it a reality? Lastly: how can I edit a reel that will keep a casting director engaged?

As I mentioned earlier in the article – these are not easy tasks. As I get busier with my various filming jobs — I find myself doing less showreels, but focusing more attention on the ones I do create. I am proud of the work I do and I am excited by what they’ve helped actors to achieve.

You can find out more about my showreel service on the acting showreel page. Feel free to contact me by emailing dj@danieljohnsonfilms.co.uk. From now until January I am busy working on my web-series, so am reducing the amount of showreels I produce, but please get in touch – if I am able to help you I will, if not I am sure I can recommend a good company/filmmaker for you to work with.