From Scratch to Screen: An Interview with AIMEE BARRETT

In 2014, I created a Showreel from Scratch for Aimee Barrett. When we first talked about what scenes I would write for her, we discussed a specific goal, which was summed up in my notes as: ‘BBC Drama’. Just two years later, her new showreel cut is made entirely out of broadcast television work – and two of those shows are iconic BBC dramas, ‘Silent Witness’ and ‘Casualty’.

Aimee is the most driven actor I know. The work she has done recently is just the tip of the iceberg. As we released her new showreel edit this week, I decided to interview her to find out a little bit more about her journey over the past few years. 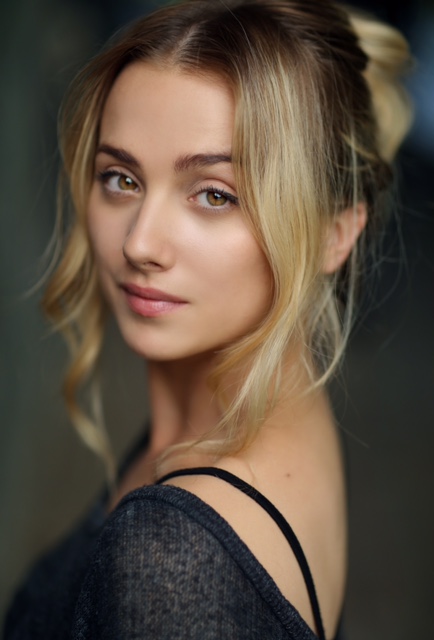 DANIEL: I’m trying to remember how you originally came across my work, do you remember? Was it just Google?

AIMEE: Really randomly. I saw a friend liked your page on Facebook and I clicked on that and that was that! 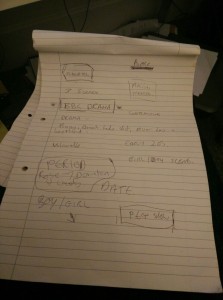 I think people make a lot of assumptions about actors based on their background and training. You trained at Urdang Academy – and while you wouldn’t necessarily think of Urdang as being a place that would turn out screen actors, I’ve met some very talented people from there — what did you get from that training that helped you become a screen actor?

In our final year we only got a couple hours of screen training with the amazing Laura Checkley which gave me a great insight into TV auditioning, without that class I would have had no clue! Then there is the great Hannah Chissick who was my acting coach and director (Into The Woods, Parade) throughout training, she always taught us to stay present as the character through these atmospheric character exercises which made us tune into the character’s weight, height, status, pace and so on. It was so interesting, I felt it work every time, it would just click. That exercise is one I always use before auditions, before going on set or stage as it completely enables me to get into their shoes and then that allows my performance to be as natural and believable as possible.

After college I have done bits and pieces of training. Recently, the wonderful Mary Doherty at The Actors Class, I did a ten week course that went alongside my filming dates and it just made me feel so in tune with my body and techniques. I really do openly welcome constructive criticism, I find it so motivating so it’s great to be in an environment with other actors and Mary saying what they see and having a safe, no-fear space to work on that. Also I swore by a weekly screen class, 3 hours long with John Melainey who used to cast with the Hubbards, he teaches you all these little tricks being in-front of the camera which are so clever. Other than that, I get my iPhone out, make a temporary stand (A LOT of shoeboxes and books) and film myself doing scenes at home. Watching yourself back helps more than I can even say!

Oh and as you mentioned it, I have to talk about it as it’s one of my pet hates – assumptions. ‘Musical theatre people can’t do straight acting’, ‘straight actors won’t be able to sing’, ‘trained dancers should never try MT bla bla bla..’ Why are we putting people in boxes – there’s enough of that in every day life let alone the industry. At the end of the day it’s all about your character and the story you’re sharing, no matter what medium that’s through. As Meisner says “Acting is the ability to live truthfully in imaginary circumstances” and if you can do that, honestly and believably and abandon all of the pretending, controlling and manipulating tools of the actors then it shouldn’t matter about your training background or if you’ve had training at all right?

I think we both wanted your initial Showreel from scratch to do something different to what was expected. Because if we just presented you as ‘pretty blonde girl’ it wouldn’t have done you much good. Looking back now, how do you feel about the characters that we created and how do you think they helped you?

I think it was the strength behind all the characters we created, as soon as I read those scripts I knew there was clearly something the character wanted in each scene which was the driving force and we absolutely most certainly showed them I don’t want to do ‘pretty blonde girl’ when all my characters are pretty much covered in blood now a days.

Below is the showreel I created with Aimee in 2014.

I’m so proud of the break-up scene, about the pictures on the phone. I think that scene got you in the room a lot and I also think it got me work creating Showreels for almost two years. People would always say, “I want a scene like that Aimee Barrett one!” Why do you think it connected?

I felt the most connected to that scene, maybe that’s why it came across the best. Also I think that’s the scene you wrote and directed best! The scene very much flowed. Team work. Didn’t you use the take that we weren’t even going to do? We finished and you were like I feel this electric atmosphere let’s just do one more and just chuck it all away and I guess it just worked.

Quite possibly, that often happens – but I don’t remember!

The months after the reel seemed busy for you, but you weren’t necessarily landing jobs. What was happening — there were auditions right? And you changed agents?

It was a tricky one, it did get me in the door for TV pretty much straight away but I don’t think I was being seen for the right roles for a while – doesn’t it always suck when the role is ‘PRETTY YOUNG GIRL 2.’ I then got a supporting lead role in a TV pilot, I was so in love with the script and role but it fell through – that’s always shit eh? After a few knockbacks I had this realisation I wasn’t on the right career path with my current agent, we wanted different things and something needed to change. The ball then started to roll when I swapped to my wonderful agents who I am with now. I went in to my meeting knowing exactly what I wanted and we completely bounced off of each other and from there I guess they believed in me and we had such a great year. Thanks to your reel I got the meeting with them and then after a couple months I was straight offered Silent Witness, off of your reel! 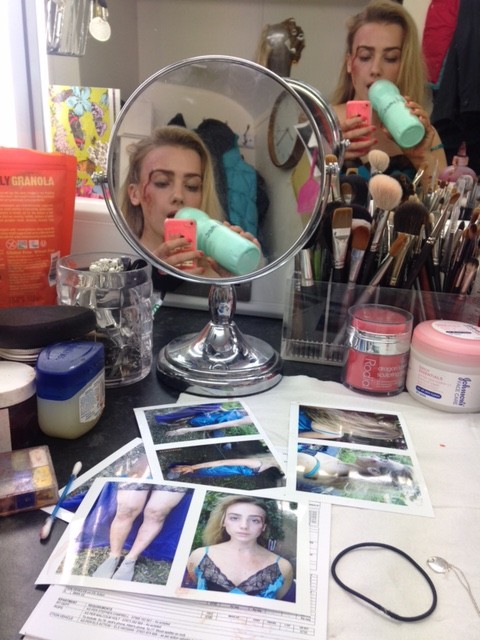 You worked on ‘Silent Witness’ and ‘Casualty’ in quick succession. What were those experiences like and what did you learn?

Before I started shooting Silent Witness I had only just finished shooting my first TV job (Obsession: Dark Desires) so I felt like that definitely helped with the newbie nerves. I was never taught anything about being on set before so it was all so brand new to me and I was learning on the job which was an incredible experience especially with the calibre of actors I was lucky enough to be working with.

Silent Witness was A LOT of action and go go GO the whole time, I was looked after so well and working with Kate Winslet’s stunt double was so fun, watching her kick ass was great.. Also, the make up team on that show never failed to amaze me, I was stood butt naked for 4 hours getting spray painted for that freezer scene, but it was so worth it for everyone as the end result was so so innocently terrifying – it was just beautiful. The team had been nervous for months for that particular scene, as we were the last two episodes so when it had finally happened and was completely perfect they were relieved. You can’t believe the amount of letters they get from people looking into the intricate detail so they have to nail it!  I also got to experience working with a drone, which is kinda like a helicopter camera and they’re so technical so I’m glad I’ve ticked that off already.

Casualty was a completely different experience, they are like a huge family as its been on for so long now and they are so welcoming. Working with Lee Haven-Jones was a dream, he is also an actor as well as our director so it just felt so smooth and he knew exactly how he wanted each shot, he would just change one of my lines direction so subtly and it would impact the scene hugely it was magic. 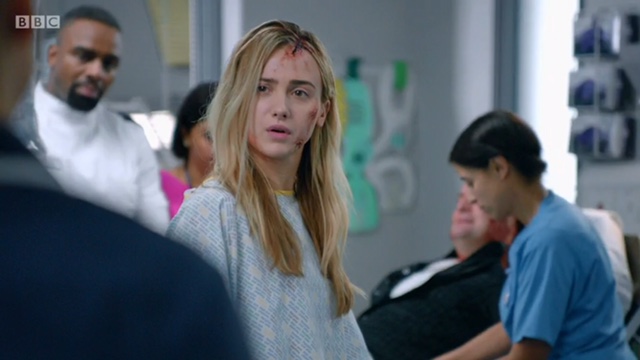 If we went back and re-shot your original scenes, what would you do differently?

What’s done is done and I’m proud of what we created. But I don’t know if it’s just me but watching it back, I just think I can see my nerves and if I did it again I would lose that and have a lot more character going on behind the eyes and not just focused on the action in front of me. Oh and I would have abused your coffee machine if we did it again, as you didn’t have one last time!

When not stealing my coffee, Aimee Barrett can be found on your TV screens. Here’s the new reel I cut, showing some of her recent television work. 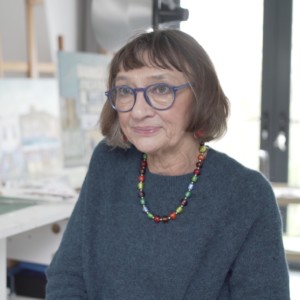 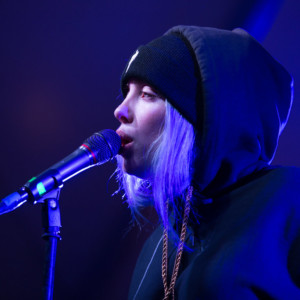 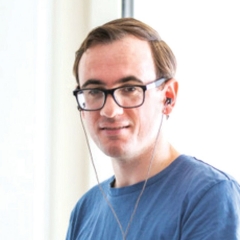